My latest book - My Cosmic Brain - On Amazon NOW - What's in my Cosmic Brain needs to be consumed by your cosmic brain - Let's GO - Here's to the 2nd Big Bang.

My Cosmic Brain - by Michael Mathiesen

New Science Fiction for those who yearn for a better future.  It's coming!

My Cosmic Brain - New Science Fiction Novel that predicts the 2nd Big Bang - BIGGEST, BEST, HOTTEST new book to hit the market now on Amazon - Audible (Soon) and Google Books.
IF I told you there is a 2nd Big Bang and it's coming at us right now - would you believe me?

AUDIBLE BOOK of My Cosmic Brain coming in Mid July could be sooner - Come back OFTEN, for the LINK 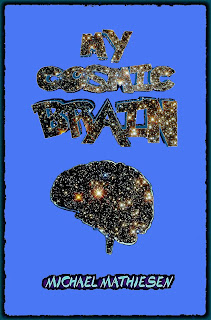 GET THE BOOK FROM YOUR PREFERRED VENDOR

AUDIBLE BOOK COMING IN NEXT FEW DAYS - KEEP SEARCHING AUDIBLE until you find it.  --- Then, give it a REVIEW

GIVE A GOOD REVIEW - and the 2nd Big BANG may HIT to you FIRST~!

ALSO - TAKE MY COURSE on the 4 STATES OF CONSCIOUSNESS

At the moment, I have all the information regarding the 2nd Big Bang almost exclusively inside of My Cosmic Brain.  Until we get it freed up and into YOUR Cosmic Brain, all may be lost for the Human Race.  You can only get the information into your own Cosmic Brain by grabbing hold of this book and reading the Hell out of it!

If you read or listen to 'My Cosmic Brain' I'm going to teach you about how the world as we know it is rapidly drawing to an end.  But not because of the reasons hitting our news media today.  There's a much more powerful reason for us to gently come to a screeching halt.  But, have no fear because another far better world is roaring around the bend in the form of an event never seen before in all the annals of Time.  It will replace the fear and hate and desperation of our time on Earth with a new genetic composition of all life on the planet so that we never have to compete for our survival again.

AND - all of this will hit you over the head with the biggest bang of your life. In most science fiction novels and movies there is always the requisite love story built in but never fully presented in terms of the real life that we know.  In this book, however, we have a real love story that wraps around the latest scientific discoveries of our day, but blending them in the only way possible that can shed an enormous amount of light on both elements of our being.

If you are an Astronomy buff, or if you are a Quantum Physics enthusiast, this is the book for you because the facts of My Cosmic Brain unifies both fields in such a way that will expand your consciousness far into the infinite and beyond.

This is not a misprint.  There is something coming to the Earth that is beyond the infinite and My Cosmic Brain is now part of it.  Join with it and you may discover a profound understanding you wouldn't have found reading or listening to anything else.

If you’re more than five years of age, or graduated from fifth grade, you've probably heard about The Big Bang, but do you know what it is, when it happened and what happened as a result?

Do you also know that a second Big Bang, what scientists are calling the Bride of Big Bang is also just over the horizon?  Can you imagine what that that means to the 1st Big Bang?  Go ahead, Try.

The year is 2045 and something truly wonderful is about to happen.

The entire universe is changing.  The biggest, most important scientific discovery in history has a twin.  Uncovered by a man who had lived in the fringes of Science and yet makes the discovery and receives the Nobel Prize for it.

This is his third Nobel.  The discovery will lead to the most amazing future for not only our world, but every other world in the universe as well.

When this thing hits, it hits with a force never seen before.  When it hits, it changes our understanding of Science itself and more of the music that makes up the universe is exposed.  It's the answer to our prayers and will put Humankind in the position of the greatness and confidence we have always deserved, but never reached it.

But 'My Cosmic Brain' is not just a Science Fiction novel.  At its core, it's actually a love story.  But, it's not like any other kind of Love Story that you've read or seen in the movies.  Oh no, this is about a much higher kind of love and if you don't live under a rock, you've experienced it once or twice in your life.  Maybe more.  You just don't remember it.

What you are about to read is one of the most inventive and creative stories ever conceived.  It's all based on the latest discoveries that the greatest scientific machinery and equipment has ever been utilized before.  The news of these events is traveling quickly around the world, but it may not be fast enough to save the planet.

In My Cosmic Brain, the solution has been building for a while now.

My Daily Environmental Journal - my 100 day journey to save the Earth. - Get Started Today on YOUR JOURNEY!

It's time to begin the effort to turn the Earth away from mass extinction in your life. I've been struggling for years now about ... 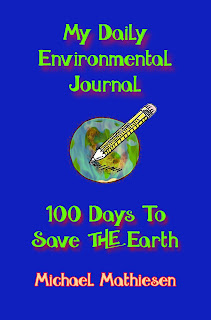